In this series I've covered the SQL Sentry Shuttle, the Top 10 Things to Do Before and After the Summit, Uptown After Hours, the Craft Beer Scene, and the Summit Map & Area Guide. Noticeably absent have been any details about the shuttle destination areas. Since the shuttle will be running starting tomorrow (Tuesday) evening, I'll try to remedy that now!

As you can probably surmise from my previous posts and the map, uptown Charlotte has a lot going on. You could spend the entire week in the uptown area and still not see it all by the time you depart. So the shuttle is certainly not mandatory to have fun here after hours – it's more of a nice option for those who want to see a little bit more of what makes Charlotte such a great place. If you spend one night at each of the two outlying shuttle destinations, the NC Music Factory and NoDa, and the rest of your time uptown, you'll be in fine shape!

Below is a brief overview of each area. I've ordered them by personal preference. In other words, if I only had one night to ride the trolley, I'd hit NoDa... which is why I'm covering it first even though it's last in stop order.

NoDa is the largest and most diverse shuttle destination. It's an eclectic arts-oriented community with many bars and restaurants. To go directly to NoDa, simply board the trolleys on the side of MLK Blvd closest to the Convention Center. It's about a 10 minute ride.

The standout restaurants are the Crepe Cellar Kitchen & Pub, Cabo Fish Taco, Heist Brewery, and Revolution Pizza & Ale House. As you can tell by the names, most are just as concerned with drink. Revolution in particular has one of the largest tap selections around, along with excellent gourmet-style pizzas.

There are also two pure breweries one stop south (#10), NoDa Brewing and Birdsong Brewing, both of which have agreed to stay open later for Summit attendees, as needed. I'd get there early to be safe. See my post on craft beer for more details on them, as well as Heist Brewery and Growler's Pourhouse.

There are several other bars and music venues here. The Neighborhood Theatre has They Might Be Giants on Tues night and Robert Cray on Weds, and the Chop Shop has Beats Antique on Tues.

The Music Factory has something for just about everyone in a very small area. For me, the two highlights are VBGB, a haven for beer lovers that I covered in my craft beer post, and Osso, a fantastic nouveau Italian restaurant. Note that there is a separate stop for VBGB (#5) after the main Music Factory stop (#4). It's a short walk, but I was afraid people might miss it otherwise since it's behind the main complex.

Small Bar is officially the smallest bar in Charlotte, with one of the friendliest bartenders, and a decent beer and drink list. It's right in between Osso and VBGB. Mattie's Diner is a very cool authentic diner built in 1948 and transported here from NJ. They serve a great breakfast all day and night. More history here. Saloon is a sports tavern type place. Wet Willie's has lots of frozen drinks and some pub food.

The Fillmore (music venue) has Australian alternative rock band Atlas Genius playing Weds night. The Comedy Zone has Killer Baez on Tues night, and a Fight Night Comedy Competition on Weds. There are some thrash metal bands playing at Saloon on Thurs, so if you aren't into that kind of thing you might want to steer clear. 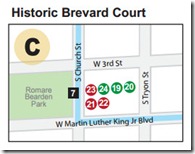 If you're not ready to hit the sack after the Music Factory, be sure to stop at Brevard Court. This area is actually uptown and easily walkable, but it was just too convenient for the shuttle to stop here on the way back to the Convention Center ;-) There are five highly rated pubs in the same courtyard, so it's a perfect place for a mini-crawl. Two of the pubs serve food, Valhalla Pub & Eatery and Nefelie's, as does The French Quarter, which is more of a restaurant than a pub IMO. If you are in the mood for a late night bite, I'd recommend Valhalla. They serve breakfast all day, and the salmon benedict is amazing! The other standouts here are Courtyard Hooligans and The Belfast Mill, both drinking-only establishments.

The EpiCentre is the central entertainment hub uptown. I think this stop will end up being more of a pickup point for those going to the Music Factory than a drop-off from the Convention Center, since it's closer to many of the hotels. I spent a little time on the EpiCentre in my After Hours post, but I'm not going to give it much more coverage here since you can easily explore it. Great place, but it's not the real reason for the shuttle.

So sit back, relax, and enjoy the trolley ride!

Posted by Greg Gonzalez at 5:48 PM